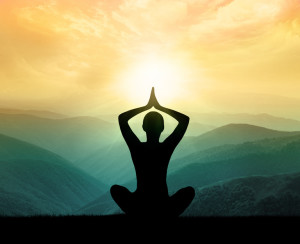 Yoga combines both exercise and mindfulness (the practice of “non-judgmental attention to experience” in the present moment). Moderate to high intensity physical exercise, including mind-body practices, have been shown to improve attainment of sobriety as well as to reduce anxiety and depression — symptoms that often trigger relapse. The famous rubric for recovery is HALT — don’t let yourself get too Hungry, Lonely, Angry or Tired. Yoga plus mindfulness is HALT from another angle. (Say it just once, for practice. HALT!)

Yoga has been helpful for people who are recovering from
alcohol dependence and opiate dependence.

Yoga and meditation have been helpful to people who want stop smoking cigarettes as well. (Which makes sense when you think of taking a deep centering breath, instead of a drag on a cigarette.)

Mindfulness programs for substance abuse include regular sitting meditations and have been shown to be even more effective than 12-step programs and psychoeducation in lowering risk of relapse and having fewer days of substance use or drinking at both six months and a year later. Yoga was just as effective as group psychotherapy over six months in reducing drug use in people attending a methadone maintenance program.

Yoga, meditation, and other mindfulness target the main symptoms of substance abuse, including cravings, impulsivity, negative mood, and increased reactions to stress.

Here are five ways mindfulness and yoga help the road to recovery.

Yoga has been shown to reduce stress and anxiety, which can often trigger substance use. By creating a capacity to observe and be aware of stressful and difficult situations, there is less need to immediately react. With mindfulness, you are better able to notice your emotions and make room for them, which decreases the pressure that you put on yourself.

Mindful attention can help people in recovery to understand better their patterns of behavior, including triggers for relapse and substance use. Yoga, meditation, and mindfulness practice focus on self-reflection. Mindfulness and yoga training emphasize awareness without a need for reaction. In other words, you get used to noticing uncomfortable feelings without needing to react or escape them.

Cravings are strong predictors of relapse. Over time, mindfulness training have been found to reduce cravings, even when people experience negative or difficult feelings.

One brain imaging study found that smokers who were trained to pay attention to smoking images in a mindful manner showed less craving on brain activity compared to those who didn’t have this training.

Negative moods and the resulting desire to avoid these feelings can play a significant role in relapse. Different forms of yoga, including regular breathing exercises, have been shown to improve mood in people going through addiction recovery.

One study found that a specialized set of breathing exercises called Sudarshana Kriya Yoga (SKY) helped people who had completed one week of detox for alcohol dependence. SKY uses three types of seated breathing skills led by a teacher: victorious breath (a slow deep breathing), bellows breath (a forced inhalation and exhalation) for 12 to 15 minutes, and cyclical breathing of slow, medium and fast cycles for 30 minutes. These exercises were followed by 20 minutes of yoga nidra, a deep relaxation state. Researchers found that people who practiced breathing exercises had significantly less depressive symptoms and lower stress hormones after only two weeks of breathing practice every other day.

An Indian study of men in prison diagnosed with substance abuse found that 6 weeks of intensive Sudarshana Kriya Yoga breathing for 25 minutes daily showed overall improved general function, reduced anxiety levels, and more positive well-being compared to a group that just focused on their natural breath for the same amount of time.

Perhaps most importantly mindfulness encourages a nonjudgmental, kind attitude toward oneself and others — a stance that helps promote healing and recovery. Mindfulness practice like yoga and meditation help you learn to accept who you are without undue self-criticism or blame. This ability to be generous and compassionate towards yourself allows you to live in the present moment without being burdened by past patterns or concerned about the perceptions and expectations of others.

This is an excerpt from my upcoming book, The Harvard Medical School Guide to Yoga with Marlynn Wei, M.D.