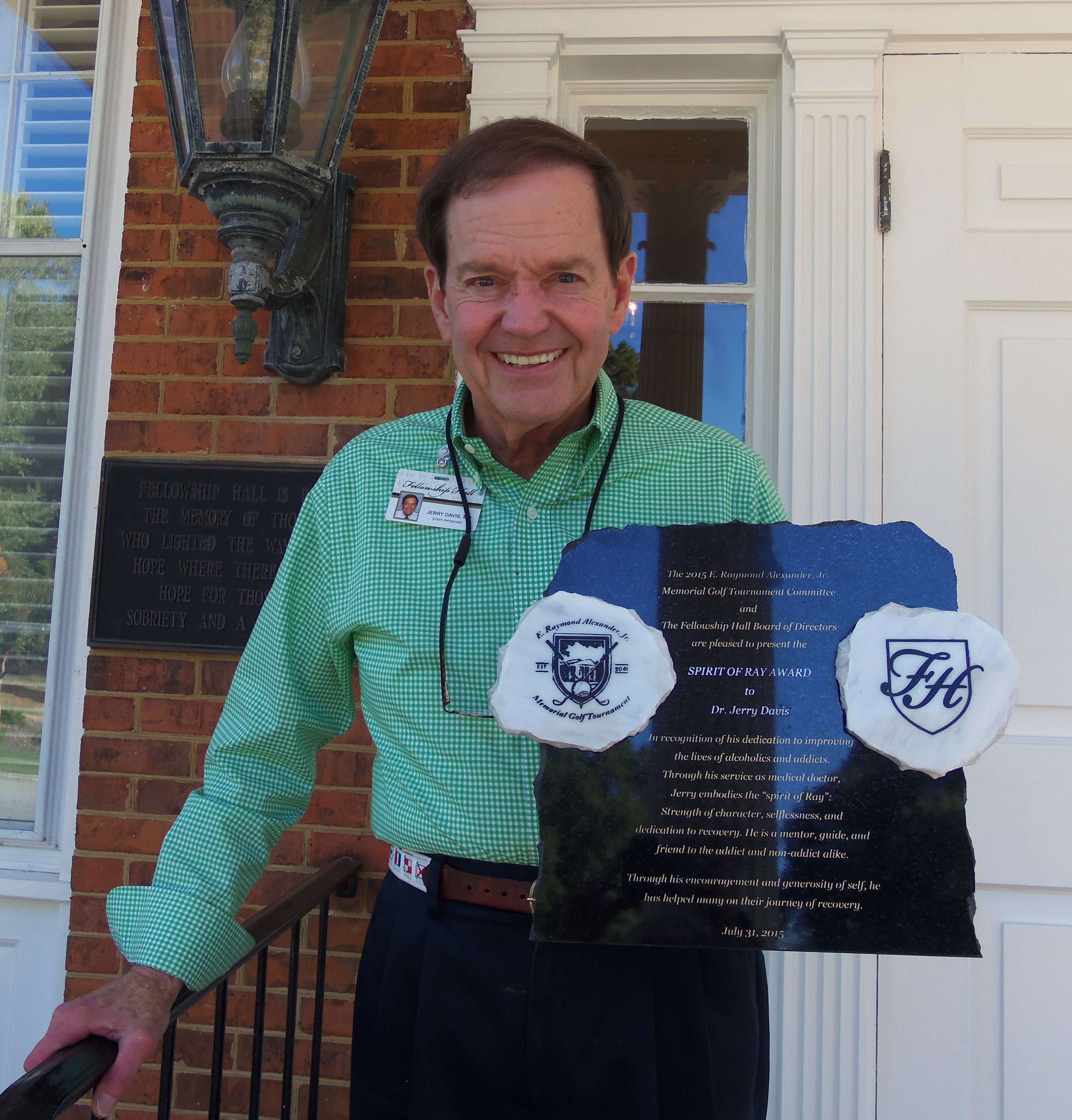 Some might say that Dr. Jerry Davis is an institution. He served on the Fellowship Hall Board of Directors for 13 years before joining the medical staff in 2011. He’s in the office every week, and a fixture at Hall events. Sometimes it’s hard to believe that he hasn’t actually been here since the very beginning.

Much like the man this award is named for, Dr. Davis embodies those most admirable of qualities: strength of character, selflessness, and dedication to recovery. As the inscription reads, “he is a mentor, guide, and friend to the addict and non-addict alike. Through his encouragement and generosity of self, he has helped many on their journey of recovery.”

Dr. Davis first became involved with Fellowship Hall through his friendship with the late E. Raymond Alexander, Jr.  And how he met Ray Alexander is a funny story indeed.
Davis grew up in Reidsville, the youngest child by 10 years of a nurse-trained homemaker, and the manager of the American Tobacco Company. His father died of bladder cancer when he was 14. It was during his father’s illness that his interest in medicine was first piqued, “I saw the compassion and care that everybody [at Baptist Hospital] showed my family”.

In high school, Jerry was a member of the golf team, and played lead guitar and organ in a beach music band. It was during those weekends playing music at the beach that he first developed a taste for alcohol. Once in college at Wake Forest University, he solidified his drinking and expanded to using amphetamines and marijuana. His position as social chair of the Kappa Sigma fraternity fueled the fire. In his first and second semesters his GPA sunk to a dismal 1.3 as his interest in “girls, drinking, and partying” increased. Finally, his mother sat him down and told him that if he didn’t straighten up, she was going to pull him out of school.

During his senior year of college, he met a young lady from Albermarle, NC whose father just so happened to be the president of the Bowman Gray School of Medicine (now the Wake Forest School of Medicine) alumni association. Not long after that, he was moved from the wait-list and accepted into the medical school.  “Now, you can say that was just good luck, but I learned early on, it’s who you know, not necessarily what you know.” Not long after that, he married the doctor’s daughter.

His first marriage survived med school, but just as he was preparing to move to Louisville, KY for an internship, his wife said she’d had enough. “I was devastated. I think I stayed drunk all through my internship.”

After graduating from the University of Louisville in 1975, Davis moved to Salisbury, NC where he practiced as the first ER physician in the area.  By this time, marriage #2 had dissolved, and he was well on his way to #3. After the sudden death of his mother, who in his own words had always coddled him and sheltered him from responsibility, his drinking took on a life of its own. With his third wife, Laura, a physician’s assistant, he would open an urgent care practice in Advance. Nine years and 2 children later that marriage too would dissolve.

It was around this time that he met Raymond Alexander. As he began the relationship that would become marriage #4 he need assistance formally dissolving numbers 2 and 3.

The story goes, in order to not be thrown in jail for not paying alimony to wife #2 Jerry would need to pay the court $2000.00. He was to report to court on Monday morning and resolve the matter. On Monday morning he entered the courthouse with Raymond Alexander, who asked Jerry to confirm that he had the money. Well… he had the money, but he didn’t have it anymore. Instead, he had spent the weekend, and the money, with friends on a yacht on Lake Norman. “We talk about a tornado going through the lives of people, I certainly was.”  Eventually, Raymond tired of these antics and sent Davis a certified letter deposing himself as his lawyer.

Eventually, Jerry started to wise up.  He’d been to treatment once, then once again, and had about 3 months of sobriety under his belt. But the center could not hold and things fell apart. And for what would be the last time.
After downing a 5th of vodka in 30 minutes, he wound up in the emergency room, and up on the psych floor. It was there that he had a life changing encounter. “The psychiatrist there, his name was Dr. Morris, called me into his office, he said,  ‘I’ve talked to the Physicians Health Program, I know that you’ve been to treatment several times, you’ve got all the tools of recovery that you need, and it doesn’t appear that you’re willing to use them to get through these problems you’re having. So I want you to go get your bag and get the (expletive) out of my hospital.’”

It was a long road back– he had lost his not only his urgent care practice but his medical license as well. He didn’t have any money, and barely had a place to live. “All this stuff that I thought defined me as a person, God just took it away. Looked down and said ‘do you hear me now?’ Have I got your attention yet?”  After living with his sister in Florida for 18 months, during which time he regained his medical license, the medical board told him to move to Raleigh, and so he did.

It was while he was living in Raleigh that he met Catherine, the woman who would become his 5th, and final wife. They met at a beach music club, the first that Jerry had set foot in since getting sober. He saw her from across the room and you might say it was love at first site. She was a spitfire from the very beginning.  Turns out that was exactly what he needed.  They’ve now been together for 23 years, married for 16. “Everybody says, ‘your 5th wife?” But this my only marriage with sobriety. The only one that I halfway know what to do as a husband!”

After working in Raleigh for several years, Davis moved back to Greensboro, and a chance encounter would put him back in touch with Raymond Alexander. “It was my first week back in town, and I’m trying to go to as many meetings as I can. So I’m downtown at West Market Street Methodist Church on a Wednesday night and I hear this booming voice in the meeting, and only one person has a voice like that, and that was E. Raymond. So I went up to him after the meeting and Raymond was so glad to see that I had finally made it to the room! That was also the night that I asked him to be my temporary sponsor. And from then until the time he died we had an ongoing sponsor/sponsee relationship.”

Jerry fondly recalls one of Raymond’s most endearing qualities. “Raymond believed in having a good time, in recovery, in anything that he did.” Raymond organized a group of golfers that would go play every weekend. He would invite those new in recovery or struggling with recovery so as to provide a support system and set the example that you could still have fun in recovery. “I always looked at Raymond as being the chief cheerleader. He was someone that would be behind you, pushing you the whole way, cheering you on, patting you on the back.”

It was that encouragement that lead Jerry to begin volunteering with the Physicians Health Program. He credits the organization with not only saving his career, but his life.  “The last time I went to treatment I had no insurance, I had no money, and they put up the front money to send me back to treatment.” He was later invited to join their board of directors, and subsequently serve two years as board chairman.

When he got his medical license back, it was difficult to find a job. No one wanted to hire a doctor with his history. He made cold call, after cold call to no avail. “I got laughed at a lot”.  It was that rejection that set him on his true path for advocacy. “I made up my mind that if I ever got back on my feet, I wanted to make it so that no physician who was in recovery, and sincere about recovery, would ever have to go through that same humiliation to get a job.”

Through his urgent care practice, Battleground Urgent Care, Dr. Davis helped many medical professionals get back to work simply by giving them another chance to practice medicine, stigma free.  Dr. Davis has also been a senior airman medical examiner with the HIMS program, an occupational substance abuse treatment protocol specifically for aviators, for more than 30 years.  “I love working around recovery people, particularly recovering professionals. That’s kind of my niche; that’s what I do for fun.”

In 1997, Jerry was dealt a very painful and personal blow, his son Christopher, who himself was struggling with alcohol and drug addiction, drowned at the age of 17. “Had I not been in recovery it would have devastated me. But you know, it’s amazing, I used all the tools of recovery. I did not have to drink. I went to a meeting and talked to people.”

The following year, Dr. Davis joined the Fellowship Hall board, which he served on from then until 2011. During his time on the board, Davis advocated for, and ultimately saw to fruition, the advent of the extended treatment program at Fellowship Hall.  At the time, there was no treatment center in North Carolina that offered 90-day treatment. He also begin working part time to assist the medical director. In 2011 Davis stepped down from the Fellowship Hall board and stepped in as Medical Director, where he served until 2014 when Dr. Washo was hired.

These days you’ll find him around the Hall, decked out in colorful button-down shirts and bow ties. When reflecting on the trials and triumphs of his life, he says that all you’ve got to do is “stick around ‘till the miracle happens!”

(This article was originally published online on October 14, 2015. A condensed version appeared in the Fall 2015 Gateway Newsletter.)