This is part one of a twelve-part series wherein we will take a closer look at each of the twelve steps of recovery. 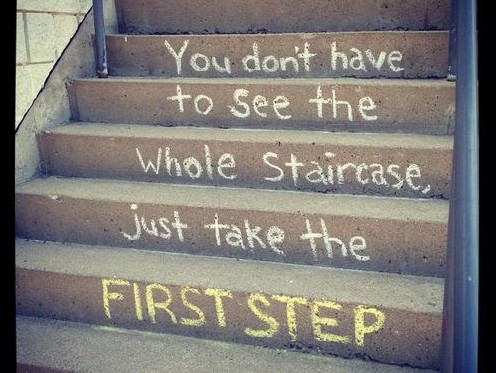 Step 1: We admitted that we were powerless over our addiction, and that our lives had become unmanageable.

Some people arrive at a 12 step meeting knowing that they are powerless over their addiction. They are exhausted from their way of living, and desperately seeking a way out; a new way to live. Then there are others who are sent here. Maybe it’s at the request of a family member, maybe it’s a requirement of a pending legal situation, or maybe it’s in effort to save a job. In either situation, it’s clear that drinking or using has become a problem.

It is easier for some to admit they are powerless over their addiction, and they may have already done so by the time they walk into their first meeting. They are so desperate for a new way of life, that admitting they are powerless over drugs and alcohol comes as a relief. For others though, this step is not as easy. It’s hard to admit that you are addicted and that you are unable to control your substance use. Addicts like to think they know what they are doing. That they can stop using at any time; that things at work or home aren’t really that bad. That it’s other people’s perceptions that are the problem.

If you find yourself in that second group and are unable to say, “I am powerless over drugs and alcohol”, then pause for a moment to consider what it is exactly that brought you to this blog in the first place.

Has there ever been a time that you promised yourself (and truly meant it) that you would not drink or use, but you ended up doing it anyway? Have you ever done something you are ashamed of, something you wouldn’t want other people to know about, to get drugs or alcohol? It could be something like stealing, or even a little “white lie” you told your parents or spouse so that you could get money or free time to go use. If any of these things sound familiar, then maybe, just maybe, you have a problem with substance abuse.
It’s important to remember a major difference between an addict and a non-addict is that a person who does not struggle with substance abuse will stop drinking or using when it starts to cause problems—because they can stop drinking or using. A person who is suffering from addiction cannot make the decision to stop; the consequences of drinking or using do not outweigh the benefit of getting high. For example, a non-alcoholic who gets a DWI won’t drink and drive again, but an alcoholic will most likely drink and drive again because they ultimately cannot make the decision not to.

To move forward, you have to acknowledge that you are not in control when you are under the influence of drugs or alcohol. That you are powerless once you take that first drink, or pill, or shot. Coming to that point can be a relief. Acknowledging this allows you to separate the person you are when you’re using, from the person you are when you’re clean and sober. If you are powerless over the effects of drugs and alcohol, then maybe you really aren’t really a bad person, a weak person, or a stupid person. Maybe you’re just a person whose body does something very different with drugs and alcohol that cannot make that chemical reaction stop on your own.  This does not mean that you are not accountable for your actions.  It does, however, mean that you cannot say what you will or will not do when drinking or using.

In taking this first step in recovery, you begin to embrace the freedom of no longer fighting to control your addiction and instead you begin to seek a solution.