Important information regarding Fellowship Hall's commitment to our guests, their families and our staff in response to the COVID-19 pandemic. We are open. Please read our COVID-19 UPDATE
Fellowship Hall » Lifestyle, Programs, Recovery » Women and Recovery 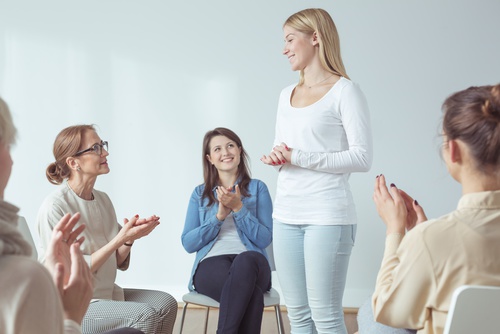 For years, recovery from chemical dependency was thought to be the same for everyone, regardless of gender. The thinking was that “addiction is addiction” and that treatment and the Twelve Step meetings were an ideal place for men and women to work together on a common problem. However, recovery is not the same for men and women. Men and women face different barriers, stigmas, and issues when it comes to their recovery. Clinical observation has shown that men and women take more emotionally positive risks and build a stronger recovery base while in gender specific treatment.

Barriers to Treatment
Women face many barriers to treatment, one of which is less access to treatment because there are simply fewer treatment beds available for women. Gender specific treatment, which is treatment tailored to the specific recovery issues that women (and men) face, is still uncommon. Women tend to have less support from their family, friends or employers, and are more likely to lose their marriage, their children, or their jobs when or if they seek treatment. Lack of social support only compounds the financial issues that women face. They often have lower paying jobs with fewer healthcare benefits then men, less access to economic resources, and almost no access to satisfactory, long-term childcare. Women also have more ancillary problems, including: being a single parent, struggle with an eating disorder, domestic violence issues, trauma issues, and dual addiction or dual diagnosis of a mental health condition.

Stigmas Women Face
A drinking or drugging woman is regarded as a “bad mother” or irresponsible wife in private and an untrustworthy, promiscuous woman in public. Being a victim of violence is both a risk factor for alcohol and drug use and a potential consequence of it. Women who are assaulted while they are ‘under the influence’ are often seen as the perpetrator rather than the victim, the thought being, “What did they expect?” Women tend to apologize for their, or someone else’s, behavior; men tend to blame someone or something for their behaviors.

Recovery Issues
Addiction expresses itself in women as a neglect of self in favor of something or someone else. Psychological development gets stuck on past dependence on unhealthy relationships, while trauma issues create a disconnection from self, others, and faith. While in treatment women need to address self-reliance; acting as well as feeling, gaining empowerment, asking questions, trusting themselves, respecting themselves, and caring for themselves. The addressing of these specific needs is why gender responsive treatment is of the utmost benefit for women.

Recovery Tools
Treatment can provide the opportunity for a woman to learn how to take care of herself and to move past the need to please others at her own expense. Women talking to and accepting each other supports the need to be taken seriously. Developing empathy in themselves and seeking empathy from others and learning to be accepted without judgement, builds the foundation for healthy relationships. Trauma-informed care can show women how to build a safe environment for themselves and provide direction for healing the wounds created by past events. The hope for every woman entering treatment is that she can learn how to ask for and receive help, knowing that she deserves it.